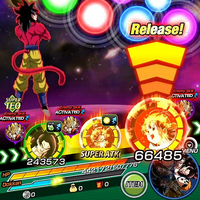 Active Skills are special skills that can be activated before collecting Ki, usually only once per battle and only after a certain amount of turns. Once the condition has been met, the player is able to decide whether it's preferable to activate it right away or to wait for a different turn.

The Active Skill will be displayed with a special animation, and often with voice acting as well.

There are several types of Active Skills, the most important ones being Ultimate Attacks, Transformations and ATK Boosts, however Active Skills can also have many other effects.

Ultimate Attacks can be considered as an extra Super Attack that the character gets to launch before even collecting Ki. Each character's max Ki Multiplier will automatically be taken into consideration, and the Ultimate Attack will usually cause ultimate damage, which is a 550% multiplier.

When comparing "Ultimate damage" to Super Attack Multipliers, it might be worth mentioning that it's slightly lower than "Mega-colossal damage Lv.20" (570%) and slightly higher than "Immense damage Lv.10" (505%).

and the enemy happens to be immune to them.

Furthermore, unlike Passive Skills which depend on your remaining HP at the start of turn, Active Skills that require your HP to fall below a certain threshold are reactive, meaning that if you recover HP above it you will lose that character's Active Skill for that turn.

These Active Skills work very similarly to other transformations, the only difference is that the player is able to decide whether or not to allow the character to transform, once the conditions have been met.

This type of Active Skill allows the player to switch from one character to a different one. These cards consist of two different characters and there's no transformation involved, but the mechanic is pretty much the same.

Unlike similar Passive Skills, Active Skills don't really add their boost to other "start of turn" Passive Skills, they're actually always calculated separately. (The same concept can be applied to characters that give an ATK boost to themselves.)

Note: if an ally has a Passive Skill that is only calculated when attacking, most support units will increase that character's damage output by the amount described in their Passive Skill, just like Pan's Active Skill always does. Such Passive Skills include:

Retrieved from "https://dbz-dokkanbattle.fandom.com/wiki/Active_Skills?oldid=1256468"
*Disclosure: Some of the links above are affiliate links, meaning, at no additional cost to you, Fandom will earn a commission if you click through and make a purchase. Community content is available under CC-BY-SA unless otherwise noted.