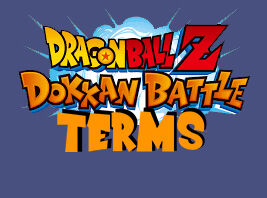 This is a page dedicated to the common terms used by players in Dokkan Battle. This page explains the description on each term, with a short definition and an example of where a term might be used. This will be updated as much as possible with the help from you in the comments section.

AoE: Stands for "Area of Effect"

BAMCO / Bamco: Refers to Bandai Namco by combining their two names into one.

Buff: A positive status effect that increases one or more of a character's (or the whole team's) base stats and/or abilities to gain an advantage over the opponent.

Character(s): Refers to cards or units.

Combo: Additional Attack(s) or Multiple Attack(s) performed by the same character in the same turn (which can also be Super Attacks)

Crit: Short for Critical and refers to a Critical Attack and the ability.

Debuff or Nerf: A negative status effect that decreases one or more of an opponent's (or the opponents' team) base stats and/or abilities to create an advantage over the opponent(s).

DEF Per Ki Sphere: DEF Per Ki Sphere is a method in Dokkan Battle where the player uses Oolong (AGL or TEQ) or Puar (INT or STR or PHY) items to change the entire layout to a certain Ki orb type. Units with a skill that increases DEF with each Ki sphere obtained can then collect these orbs for massive defence outputs.

DPS: A modified term referring to Damage Per Shot or sometimes Damage per Super (Attack) depending on the context.

Gacha: Refers to the Gachas or Summon Banners.

For a list on the various Gachas in Dokkan Battle check Gachas.

Gachapon: Toy vending machines with various goodies or gifts inside usually toys and cards. These vending machines had their root in Japan but have spread to many countries, especially in East and Southeast Asia.

Ki Glitch: A glitch in Dokkan Battle that allows players to reboot the game to determine which character gains a Ki boost from a Ki boosting circle (or pad) on the Board.

Leaders: Characters that should be the leader of a team, most commonly due to having a highly beneficial Leader Skill.

Mono-Type Team: A team comprised of characters of the same Type

Nuking / Carpet Bomber: A Super Attack that inflicts much higher damage than usual due to the attacking character gaining ATK boosts by collecting a string of Spheres of the same Type, commonly the character's own Type.

OP: In games this commonly stands for "Over-Powered".

OVER 9000: A term originally used by Vegeta, which became a famous Dragon Ball meme. Used by fans to describe something powerful.

Rainbow: Rainbow Ki Sphere is a unique Type of spheres that can form a chain with any other Ki color.

Rainbow Team: A team comprised of all 5 Types of character attributes.

Re-Rolling: A method used when starting a new account to gain new (and better) characters.

Sealing: Short for Super Attack Sealing, an ability, typically part of a character's Super Attack effects or Passive Skill, that prevents opponent(s) from launching a Super Attack against the player's Team.

Spawn: Originally this term refers to the re-awakening of a character after dying in-game. One of the key elements of this term is the frequency of multiple or repeat appearances.

Spheres: Ki Spheres (also Ki, Ki Balls or Ki Orbs) are the spheres collected to gather Ki (indicated by 'bar') in the Ki meter or gauge surrounding a character's icon in battle.

Stunning: Stun is an ability that enables a character to stop an enemy from launching attacks or Super Attacks.

The (Game) Developer: This refers to the developer of Dokkan Battle game which is a company contracted by BNEI known as Akatsuki Inc. (Japanese page)

Tier: Tier is a fan-based naming system to classify or group cards in a hierarchy from "best" to "worst", depending on player opinion.

Type: Type can have a few different meanings.

Yolo: A play of words on a single summon (or solo summon) and the phrase "you only live once," referring to performing a single summon while hoping to get a great character, in spite of the fact that a multi-summon guarantees an SSR card.

There are five (six if you count the Rainbow Type) different Types of Ki Spheres and Character Types. Each Type has its own strengths and weaknesses.

With the number of varied transformations entering Dokkan Battle, a change to some of the thumbs had to be made to allow for instant clarification of what a card does or has done in a page.

Round Robin: a tournament in which each competitor plays in turn against every other. (source: Google)

Sortie: an attack made by troops coming out from a position of defense. (source: Google)