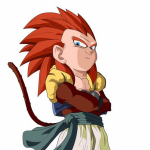 "Oh Boi prepare your buttocks because we got a bunch of slap diddly stiff for you. Wow look at all these guys (bwassshh boooom) (pew pew pew pew) woagh it's that one dude! R F vjj c tj f h da h f ycrf&#%&!%&$gdyb/|t%\$-gheji holy cow its those two red guys remember them from 6 months ago? Woagh boom pwoosh feeeeeew pow kapooie! Buy our stuff." :) - A true Poet who touched my heart.

Don't take everything too serious! Got a question? Ask! Playing 930+ days in a row and counting. Learned why there are Transfer Codes the hard way. Make them! Don't keep them on the phone. Hard Reset gives zero sexual intercores! (Swearing is an issue, here...)

Since Bamco is adding new stuff every week, you can't beat this game. POWER CREEP IS GETTIN' OUTTA HAND...


(Most badass fighter there is. Period!)


Get a STR-Team with 2-3 Cards, which SAs "lower DEF". After 2 Hits with that kind of SA you will do regular damage, next round. You´ll need Items to give you KI, so you get your SAs launched and Baba or Pilaf, to survive the 2nd fight. If STR Brolys SA hits you, you are done! Z-Hard last STR, Super PHY Enemy.

The Evil Emperor of the Universe


STR Team with Cards to block and to seal. Like Omega, SSJ 3 Vegeta, Majin Buu Gotenks absorbed, Instant Transmission Goku, Cosmic Dawdler Pan, so on. Take Usher, when the Countdown reaches one, Frieza should get stunned or seal his Super. He will do just a regular Attack and you will be safe. Stunning prevents his Super and delays the Countdown. First fight TEQ, second AGL, last PHY Enemy.

Try to seal his Supers, use Baba and/or Pilaf if necessary. Sit the first fight out. Second you will do damage! Third, try to pair "Power bestowed by God" Cards, so he doesn´t heal that much. If you only got 2, use Usher. After that round, if you haven´t finished him, you need hard hitters... least one serious and not INT! After that fight, good luck! INT, STR, INT (heals up), PHY, TEQ, TEQ Enemy.

I think one of the trickiest... If you haven´t got "Fierce Battle"-skilled Cards, you will pay in DS. A lot. Second fight can be tough, too. I learned it the hard way. Had to do it several times with DS to get my TEQ Vegito awakened, after that, SSJ Vegito lead, Friend SSJ Dokkan Vegito lead. Tried to get my TEQ Dokkan Vegito next to Friend Vegito. Vegito blocked. Fierce Battle SA and his Blocks did serious damage to the Enemy and didn´t take much time after that. Prefered Items are Dende, Senzu, some KI-Boost for SA´s and Baba, so Enemy triggers Friend Vegitos Passive. Will work with INT Vegito, too. STR&INT, INT, AGL Enemy.

This is a bit like FAQs... Questions I had myself or stumbled on in the Forum. It´s supposed to be a short version of crowdknowledge. If you think something should be added, let me know!

Retrieved from "https://dbz-dokkanbattle.fandom.com/wiki/User:FKay?oldid=879525"
Community content is available under CC-BY-SA unless otherwise noted.